Groundwater flooding is the emergence of groundwater at the ground surface. It can occur in a variety of geological settings including valleys in areas underlain by Chalk, and in river valleys with thick deposits of alluvium and river gravels. Groundwater flooding happens in response to a combination of already high groundwater levels (usually during mid- or late-winter) and intense or unusually lengthy storm events. Groundwater flooding often lasts much longer than flooding caused by a river over-flowing its banks. It may last many months and can cause significant social and economic disruption to the affected areas.

Charge: Subject to licence fee and data preparation fee. 30p per km2 as of June 2014. 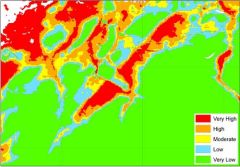 Disclaimer: The information contained on this page was correct at time of publication. It is meant as a quick and easy reference for those wishing to know what UK-wide water datasets are available. For full and definitive data descriptions and licensing arrangements contact the licensor directly.

The Water Security Knowledge Exchange Portal supports the objectives of the UK Water Partnership - a collaboration between the water industry, policy and research communities. It provides guidance and co-ordination for water research and innovation in the UK.